Recently, I ran into an issue. We use Datadog to record and graph metrics on our systems and environment. They’ve helpfully provided a library to emit metrics from C# applications. They’ve even published it on NuGet! Of course, we don’t want to tie our application code directly to Datadog’s API. One day, somebody might get a bright idea and say that, instead, we should be storing our metrics in Microsoft Application Insights. At that point we don’t want to have to rewrite large parts of our code. So we’ve defined an interface called Metrics and created a private NuGet package that provides an implementation of that interface. If we switch implementations, all we have to do is switch out that library, rewrite some configuration code, and we’re good to go. So far, so good.

I happened to be upgrading a project from MSBuild tooling to dotnet tooling. The process for that is pretty much as follows:

While I was going through the errors, I saw there was a direct dependency on Datadog’s library to be able to configure it. I opened the ‘Manage NuGet Packages’ tool window and installed the DogStatsD-CSharp-Client package. The version installed was 3.1.0. A bit later I came across some code that used our Metrics implementation, so I installed our private NuGet package. It had a dependency on version 3.0.0 of the same DogStatsD-CSharp-Client package. Because we know the dotnet tooling can deal with this version conflict, I didn’t even give it a second thought.

Finally, it was time to run the code. I was presented with a very disturbing error.

The runtime cannot load version 3.0.0.94 of the DogStatsD-CSharp-Client library. I have just upgraded the version, so could that be a problem? It should’t be, because the build system should handle all of this for me. Maybe there’s an issue with the binding redirects. The new build system automatically generates these based on the references and stores them in MyAssemblyName.dll.config (or .exe.config, of course).

Lots of binding redirects there, but none for DogStatsD-CSharp-Client.

So, alright, definitely a missing file. Let’s look at the ‘bin’ directory. There are hundreds of files there, but, indeed, DogStatsD-CSharp-Client.dll is not one of them. What gives? I have a direct dependency on the package, so it should be there, right? Is there somehow an issue with the NuGet package? If there were, I would expect to get build errors, though. 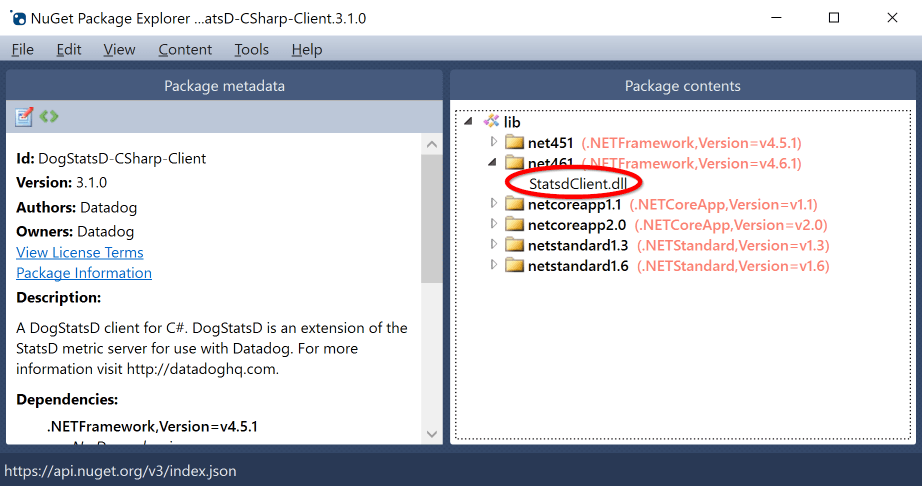 Well, well, well. The file in the 3.1.0 version of the NuGet package is called StatsdClient.dll. Just to drive the point home, what does the 3.0.0 version look like? 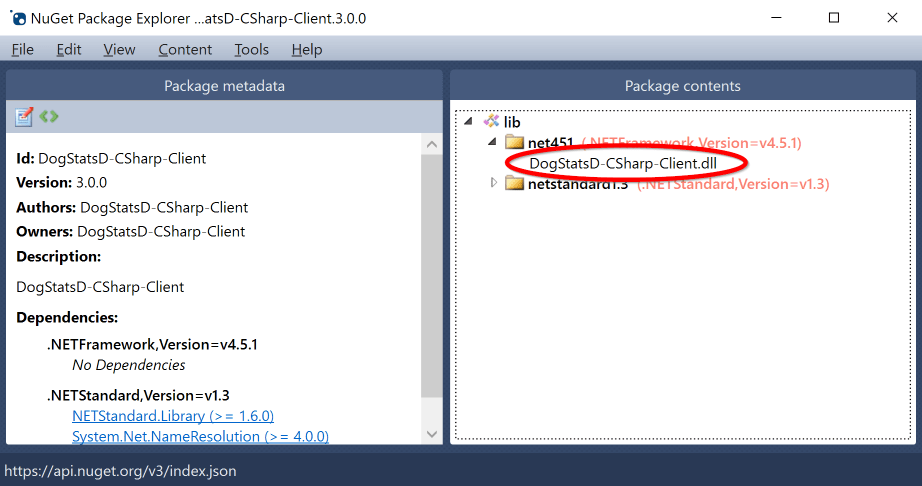 The hosting application, however, has a direct reference to version 3.1.0 of the package, so it refers to methods in StatsdClient.dll. Let me show you some IL code to illustrate this.

In the NuGet package, the IL for that looks like this:

For those of you not fluent in IL (which includes myself), the second line is saying ‘call a static method Configure from the type StatsdClient.DogStatsd, located in the assembly DogStatsD-CSharp-Client’.

In the hosting application, the IL for the exact same code looks like this:

The exact same method is being called, but declared as coming from a different assembly.

In this case, because the conflict is located in a NuGet package, the result is a file not being found, which is a pretty visible problem that also manifests itself in a clear way.

If, however, the implementation for the Metrics interface had been a project in the same solution, the issue would have been much more subtle and might never have been discovered. 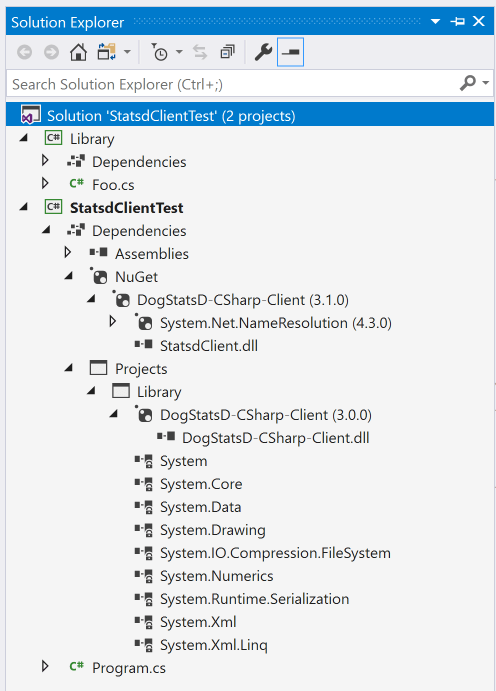 In my console application, I call out to the library project, which calls out to DogStatsD-CSharp-Client.dll. It should cause an exception, right? I thought so too, but it doesn’t. Looking in the bin directory, we can see why. 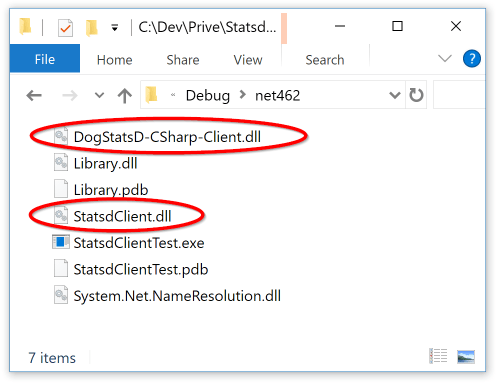 MSBuild has a lot more insight into what the library project is referencing, so it dutifully copies DogStatsD-CSharp-Client.dll into the bin directory of the main project. The library’s code is linked to that, so when that code is executed, the runtime loads DogStatsD-CSharp-Client.dll and runs its code. However, when the main project uses code from the NuGet package – to configure the client, for example – the runtime also loads StatsdClient.dll and runs its code.

Why is this bad? Well, because of the different assembly names, the runtime considers these to be different modules, which causes all kinds of ‘strange’ behavior.

For example, static members defined in DogStatsD-CSharp-Client.dll are not the same as those in StatsdClient.dll. This means that I can ‘configure’ the client in the main project, but the code in the library project doesn’t see any of that.

Let’s see this in practice. One of the settings that can be configured is the prefix that automatically gets added to metric names. Because this is a private piece of data, I wrote some code that extracts it by reflection.

I configured the prefix to be "test" in the main project, and when I run the method from both projects, you can see it doesn’t work as we intended:

Now, this is just a metric prefix, but you can imagine what might happen if you configure, for example, a connection string in this manner.

Dependency injection might also suffer from this problem. As you can see in the code snippet I use to extract the static prefix, there is a type called DogStatsdService. This is actually a public type that is the non-static version of the API. It also implements an interface called IDogStatsd.

I can write a class Foo (because naming is difficult) in my library project that has a dependency on IDogStatsd. In my hosting application, I’ll register DogStatsdService to be the implementation for IDogStatsd. Using SimpleInjector, trying to resolve Foo will result in the following exception:

It still requires a fair bit of investigation to resolve.

In general, just don’t change the assembly name. Ever. Stick with the one you used when you first published the package.