Note: I’ve fictionalized package names in this blog, because the problem has nothing to do with the authors, and I wouldn’t want their names to be associated with this problem.

Let’s first start with a slightly simpler question: what is a transitive dependency?

A transitive dependency is an indirect dependency; you depend on something which itself has another dependency that you don’t depend on.

Now, when you create this exact project structure, there will not be an issue; MSBuild will build project D, then project C, and finally project B. The output directory for project B will contain B.dll, C.dll, and D.dll. So far, so good.

Now let’s say that C is a NuGet package, and so is D. The picture changes slightly, because in when you install a package in a classic MSBuild project, its dependencies will also be directly referenced by B. So B has a direct reference to D. However, there is not a single line of code that actually mentions D, or any of its symbols. If you squint, it is still a transitive dependency.

So far, nothing. When you compile the project, the output directory will still contain B.dll, C.dll, and D.dll, just like when they were still projects.

What I’ve left out, so far, is that, actually, there is another layer of referencing. See, in our situation, B is actually the persistence layer of that particular solution. C is a wrapper library that we’d written around D, which is a commonly used NuGet package. The persistence layer is being referenced by the ‘host’ project, which in our case is a web API. Let’s call that A. Now you see why I started with B.

Project A has a reference to B, but does not have any reference to the dependencies of B. The problem was that, although C.dll was copied to the output directory for A, D.dll was not.

Initially, we thought it was ‘just a bug’ in MSBuild. We’d written a hacky MSBuild task to just recursively copy all of the dependencies from all the projects referenced by the main project. I refused to believe this was a scenario that MSBuild ‘just didn’t support,’ so I started digging.

I built our solution with the verbosity set to ‘Detailed,’ and then I came across a couple of interesting messages. Some details left out for brevity.

This makes sense; C is a utilities library, and for libraries you usually want to depend on the lowest possible version, to maximize compatibility. However, when you’re writing application code, you typically want to depend on the highest possible version, because that might have fewer bugs. This is pretty much what happened; we’d already added a reference to version 1.50.2.0 of package D to project B, and only later did we add a reference to package C.

A few things stand out from the MSBuild output:

These are not major issues (except for the build completing succesfully), but they might slow down an investigation into why something is not working.

So, to recap: because project B has a direct reference to package D, version 1.50.2.0 of that package gets copied to the output directory for project B. When building project A, MSBuild is not able to resolve the reference, because it only sees that package C depends on version 1.50.0.0 of package D. It does irk me that this kind of stuff does not fail the build.

However, at run-time this will cause exceptions; the runtime will load C.dll and see that it has a reference to version 1.50.0.0 of D.dll. It will attempt to load D.dll, but this is not available, so .NET will throw a File​Not​Found​Exception.

The ‘proper’ way of fixing this issue is to create a binding redirect in the app.config or web.config for project A. This is a pretty cumbersome process, as you have to figure out the exact assembly version of the dependency, which might be different from the package version, and in a lot of cases you also have to copy and paste the public key token. In short, this is not a very pleasant experience. Unfortunately, for classic MSBuild projects, it is the only real solution.

But wait, we’re not done, yet. I made a remark earlier, which is significant to the problem.

However, there is not a single line of code that references D.

If you do add a line of code that references that dependency, then the binding redirect does not appear to be necessary. Apparently, MSBuild does some form of tree-shaking to figure out which dependencies are really required and which ones are only there to satisfy indirect dependencies.

.NET Core to the rescue

Fortunately, there is an even easier solution: use the .NET Core build system (or ‘the new .csproj format, or dotnet, or whatever you want to call it).

The new .csproj format only requires you to specify the direct reference. In our case, that would be package C.

When the project is built, .NET Core will first restore all packages, and figure out that package D is a dependency of package C. The big difference is that it doesn’t require project B to have a direct reference to package D.

If you want to upgrade to a different version of package D, you can do this by simply adding a direct reference to it to project B and specifying the version you need. Direct dependencies take precedence over indirect ones, and when packages are restored, .NET Core will resolve the versions correctly. 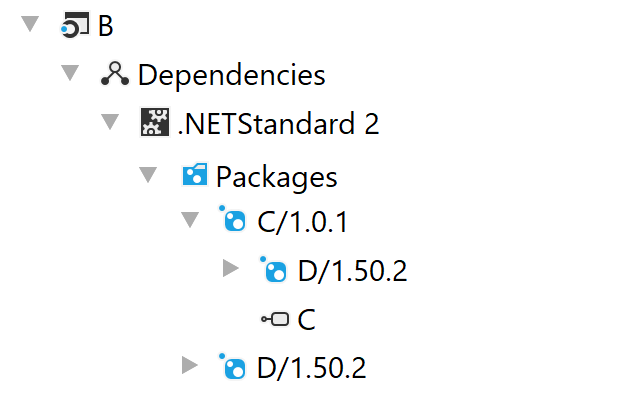 Even with NuGet (or maybe especially with NuGet), version hell is still alive and kicking. Do yourself a favor and upgrade to the .NET Core build pipeline. It comes with so many other benefits (such as not having to update your .csproj when you add or remove a file), and this is just an added bonus.